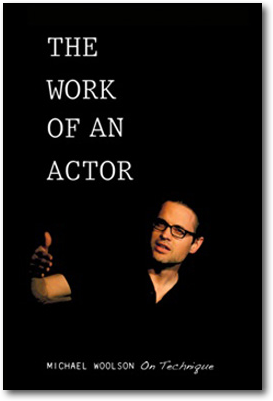 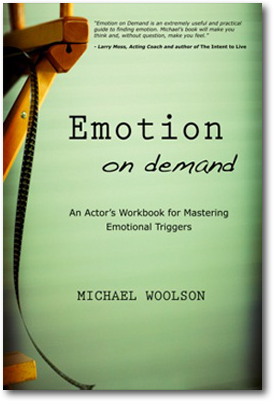 Currently adopted for use as textbooks in many colleges and universities across the country, The Work of an Actor and Emotion on Demand set new industry standards for books on acting that provide tools like no other, delivering a wealth of clear, detailed instructions and inspiration for giving unforgettably captivating performances for actors of all levels.

In The Work of an Actor, Michael Woolson shares the essential foundation and mechanics of acting in a clear and concise manner. Woolson outlines how to play a killer, how to create authentic fear, sitcom technique, making sense of bad direction, how to audition effectively, and how to build layered character work. Plus, he introduces the most extensive chapter ever written on how to give believable drug-induced performances without drugs as well as the first-ever list of great dialects in films to use as research.

Emotion on Demand demystifies the process of reaching intense emotional places by breaking it down into a simple, straightforward technique. For the first time in an acting book, artists are given the opportunity to improve their emotional intelligence with extensive exercises and a format for writing down important details and discoveries.

The Work of an Actor is superb. Personal, nurturing, concise, bottom-line reality of what it costs physically, technically, emotionally, spiritually, and mentally to become a contender. In short, an outstanding achievement.”
Daine Venora, Golden Globe-nominated Actor

“Emotion on Demand is an extremely useful and practical guide to finding emotion. Michael’s book will make you think and, without question, make you feel.”
Larry Moss, Acting Coach and Author of The Intent to Live

“Finally, someone has made an understandable, easy-to-use reference guide that can be carried on set. The Work of an Actor is an acting bible that makes technique clear where many other books on the craft are confusing and befuddling. It goes further by providing suggestions for additional reading to deepen your understanding of the craft, improve your life skills, and it even includes a section on which films to watch for certain authentic accents. It is a book written with common sense for serious actors; the ones who don’t enjoy the smell of their own farts.”
Evan Peters, Actor, American Horror Story, Kick ass

“As someone who has sat in on Michael’s classes and auditions his clients, I can say that he has an amazing ability to bring out emotional depth and honesty in any actor. He gives them a solid technique to create brave, multi-layered performances that stand out from the rest. As a casting director, that’s exactly what I look for. This book is the how-to for those performances.”
Johanna Ray, Casting Director, Inglorious Basterds

“Not only does Michael Woolson’s The Work of an Actor offer solid advice for any actor auditioning for film and television, but his comments are also very instructive for stage actors. His obvious care and concern for his students is clear. In a highly competitive profession, his humane and sensible approach to character development is invaluable.”
Charlotte J. Headrick, Ph.D. Prof. of Theatre Arts, Oregon State University